As background, I did an under $9 shop last Tuesday night and with my haul, attempted to make three full dinners that would feed  myself and DH with leftovers, a family of four perhaps, with two adults and two children, or one person, with options to tuck away for future meals-basically-four portions. I'll start out saying, all three meals would easily fit into our life on a regular basis. I'll make some tweaks as the sodium needs to come down. To read about my full shop and initial plan, go to My Wednesday Pantry-$3.00 Meal Planning post. For the most part, I only used items I bought in the $8.81 shop, but allowed a bit of oil and seasonings I had in the house. Most of my seasonings are the $1 versions bought in Dollar Tree, Aldi, or Walmart and I used very little, but if you had none of these items,  these meals could still be made.

I'll reiterate that this was for fun, a self imposed budget challenge, meant to stretch my creativity while harnessing in the over indulgent spending I have done on meals out of the house for the last two weeks. As you'll see from my summary of the overall  nutritional details, there are many faults. Had I allowed the use of milk, eggs, flour, and butter, I could have cut the flaws considerably. As for meal prep, for things that were individual items (toastie dogs and grilled cheese), I only made what DH and I would eat, so have  the ingredients for the other two portions uncooked. With that out of the way, let's get going. 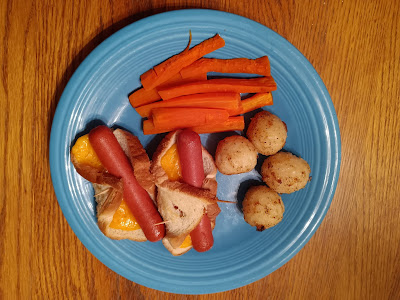 Toastie dogs were my favorite school lunch as a child, and none of my kids really liked them.It was nostalgic for me to bring into this plan as I never have reason to make them, even though hotdog's were not my first choice to buy. DH loved the potatoes! I rinsed them before tossing them in a touch of olive oil, pepper, garlic powder, and onion powder. We should have had 4/4 potatoes servings but DH devoured them! He also ate all the carrots. 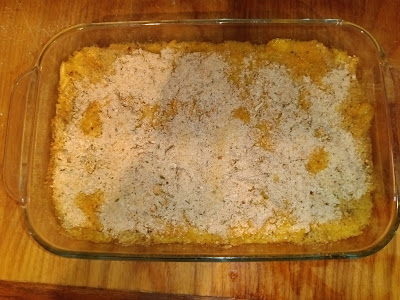 DH loved the pasta bake. He said it tasted like  restaurant mac and cheese and was surprised the base was from a box. He ate two portions of it, but we both only had one serving of carrots and beans. I was not impressed with the Aldi beans. Way too much liquid, and all the flavor was in the liquid. Chef Owing had an idea to cook hotdog slices in the beans. I could have done that and cooked down some of the sauce and they might have had a heartier taste. Even had I pan fried the beans to cook down liquid they might have been better, but I just zapped them in the microwave. 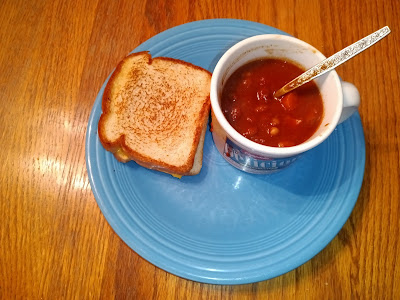 DH could eat grilled cheese sandwiches everyday if he allowed himself, and he ate two so if we had been feeding four people, someone would have not had one. (My butt sure could have passed!). The chili was more like a chili flavored tomato bean soup than a true chili, but tasted good. The carrots sort of acted as a bit of sweetener to cut the acidity of the canned tomatoes, but wasn't really noticed in the  bowl. I suppose they added a few more vitamins as well. The chili made enough for four + hearty bowls. I'm freezing two generous portions.
What would I have leftover, assuming four portions were made of everything? Two small carrots and two slices of bread. That's it. Yes, four people could be fed easily, but likely no seconds for bigger eaters. This was actually good for me, as I sometimes eat more before my stomach has told me I've had enough. I honestly can say, I had plenty with limiting my plate to a single portion of each. I converted all serving sizes to fit four servings-some smaller, some larger. For a household with two adults and two younger children, this seems like it would work well.  Since only feeding two of us and with DH eating more than one portion of somethings, there are four hotdogs,  8 slices of bread, 16 cheese cubes, 1/2 can pork and beans, 1 cup of cooked carrots, 1 portion of pasta bake, and at least three cups of chili.

The chart above shows the nutritional break down in total of each meal in terms of calories, protein, sodium and fat. The biggest offenders to sodium was the soup and hotdogs. I could have easily made a white sauce instead of the soup, and had I found turkey hot dogs, or a lower sodium version, that might have helped there. It was a fun challenge and the number nerd in me got to do some math equations to  figure out the mix of all the ingredients. I'd be happy to try something like this again. Let me know in the comments if this would be of interest to you.
Posted by SAM at 7:00 AM