The gifts have been distributed and opened. I'll get to UPS and mail my son gifts he wasn't here to open. It's going to be expensive, but I don't care. I'll like knowing he has things from us, his sisters, his grandma, cousin- and that connection even though we are far away, is a gift to me. I loved spending hours with him via Facebook messenger Sunday night, talking about everything and nothing. He used his new tablet from us, and I am pleased as punch that it works well.  My daughter trekking to the store Sunday and helping me talk myself out of stupid spending, but giving me a thumbs up when a something might make a good gift for someone in the future, that time was a gift. All of us taking a Sunday afternoon to do our own decompressing was a gift. We all got lovely things from each other, but allowing each of us the time for our needs is greatly appreciated. Now we're done with as Vix calls it, the silly season, I can put my energy towards the new year, new possibilities. Every day though should be that, though, right?

Speaking of physical gifts, I got some lovely ones. My daughter once again knocked it out of the park with both making me this mug, with one of her photographs, this one taken at Mt Rainier. If you know what flower, let us know. Look at how she captured the detail of the flower and the sky behind! She also then used this photo which you have seen me borrow before, to have this print along with one of her poems framed. She had a mug made for her grandma with a lake sunrise photo.

Look at this massive collection of books! This was from DD2, and while she was the ultimate thrifter and spent very little, she was all heart in selecting historical fiction that has the nautical theme. Have you read much Patrick O'Brian? I have not, but know his work. I have visions of how I want to install book shelves above the window and dropped ceiling walls and transform my office into a library. That's another 2022 project! Seriously though, if you have book lovers, thrift away to find them a unique collection for pennies. I love that many of these books have inscriptions, like this one, though it looks like Edward didn't even crack the cover of the book Ricardo bought him.

DS is his normal late shopper and things are on route in the mail. To his defense this time, he was out of town for the three weeks between Thanksgiving and Christmas. It's always fun to see what books and films he finds for all of us. He gravitates between his personal recommendations and classics he knows we'll enjoy.

About six months ago, DD1 decided to order herself a ukulele. It was about the time her old guitar and violin resurfaced after we cleaned out her old room for my office and she thought she'd create a little music nook. It didn't take her long to decide it was not part of her future, but knew her sister would love it. Big sister for the win. She gave it to her as an early birthday present on Christmas morning and it already has spent hours in her hands. It's a lovely instrument and I'm sure it will be enjoyed for decades. She in return received a little known Elton John LP. 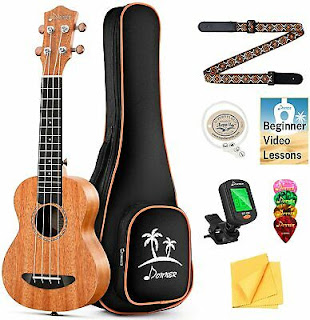 I was perhaps uncreative with DH. I got him a new fleece sweatshirt, peanut butter cups from Trader Joe's and the hot chocolate bombs. I also found this in late summer, and thought this might be a not so subtle hint to prioritize getting the back yard deck  replaced with the patio, and update our landscaping, ready to spend evenings outside. OK, a little selfish perhaps, but he did really like it.

I decided though that with my Kohls cash, I'm getting a gift for both of us-new cutlery. Our is mismatched due to pieces being lost, and picking up strays elsewhere. I think I'm also going to get  some of the bamboo drawers dividers and really make the drawer nice, and ditch the rubber made from 1987. It sounds funny, but I know that will please DH immensely. He hates the mismatched cutlery and will only use the remaining forks and butter knives from our original Oneida set. It's a sensory thing-as is the sweat shirt as he  is very particular about what he likes to touch or hold. And if you are wondering, no, he does not bring his own fork and knife places, but does comment (to me) when he really doesn't like one.

Now I start my new hunt for gifts that will be given over the course of the year and next Christmas.  I found a few things on Sunday to tuck away. Mostly though, I hope I give everyone a better attitude in 2022-less grumbling about things I can't control, and more focus on the things that are naturally wonderful like  sunny days, laughter, good food and company, and the gifts in front of me every day.