My Wednesday Pantry- Making It Up, Using It Up 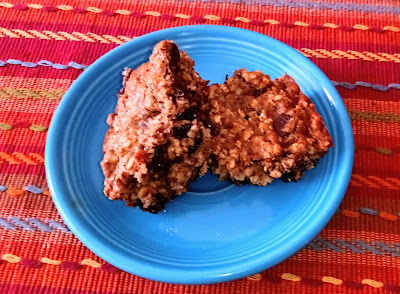 While I had freedom on Saturday to get out and about, I didn't really need anything or to do anything that justified getting the car warmed up. Pup and I had our walk though and it was cold, but the wind wasn't biting. I had just a bit of baking mojo going before we went out and thought something fresh with a cup of tea would be just the thing after our walk. I had just put a couple bananas in the freezer earlier in the week, plus there's an old stash too, but I wasn't feeling bread. What I wanted was a good bar type treat. I couldn't really find a recipe for the assorted things I have on hand, but I figured I have enough baking know how to cobble something together. My result was a chewy nutty, fruity oatmeal banana bar that also used up some chocolate chips,pecans and craisins left from the holidays, as well as those two bananas. Some of you call these pan cookies, or I've heard the UK folks call them flap jacks, or maybe even sort of a brownie. I made them plant based so I could bring some to my daughter for her lunches and snacks.

Here's my recipe ( sort of)

Cream all this together. Then add:

Spread/ press in a 9 by 13 baking pan and bake for approximately 25 minutes in  a preheated 350 degree oven. Cool and slice into 24 bars.

I wanted to taste the oats plus wasn't yet sure of the final product, so was restrained adding extras. Next time I'll do more craisins and nuts if I have them, but chocolate was about right. In hindsight, I had dates I could have chopped and used, so next time. I think they could have used at least another 1/2 to a cup combination of flour and oats- maybe 1/4 more each. Also, head palm that I did not use peanut butter instead of oil for the little fat I felt the recipe needed. Maybe these aren't anymore nutritious than other cookies or bars, but they feel substantial and eating one actually is  satisfying that sweet crave I get without mindlessly eating too many. Let me know if you give them a try. Do you ever just wing it with recipes based on other tried and true versions?

I thought this might be a good place to update you all on my Ninja Hot Cold Brew System. I finally set it up on Sunday and have used for my morning cup the last three mornings. I've had to play a bit with the amount of grounds, and think I might go back to grinding beans to get a finer grind which will yield a stronger cup without having to use so many scoops. Because so little water goes through the grinds on a single mug, it takes more grounds to get the rich taste I want and that could get expensive. It seemed fine for a pot though. I like my coffee rich. I'll like being able to make just a large mug at a time, keeps me from drinking a whole darn pot, which was what I liked about the Keurig. It's not the Nespresso Inissio I really wanted, but it will do. I'm still not sure on the price point. He layered sales, but it is still an expensive coffee maker. When it gets warmer, I'll try the cold brew function and the ice tea functions and see if we like the results. My girls like the cold brew coffees, while I prefer to drink it hot year round. This is not where it will stay on my counter, still reworking my counter layout. Now, I'm off to make cup two. Forget what I said earlier about keeping to just one.