Friday Free for All- Managing Disappointments 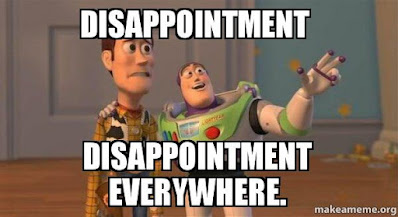 How do handle minor or major disappointments in life? I'll start Friday Free for All with this question? Do you seek out reasons for it, and try and get a better outcome next time? Do you let it roll off your shoulders, move on, and not think anymore about it? Or, like a spoiled rotten child, pick up a plate still with swaths of ketchup, and throw it against a wall?

I'm in a private Facebook group that I won't give details on, but it's been a definite support resource. I have a good life, but there's a nagging disappointment or two that sharing thoughts, reactions, and hard days in a somewhat anonymous manner is helpful. Reading how others navigate similar situations, helping me gain perspective, lightens my burden for a bit. It's sort of the opposite of unrealistic social media posts.

I probably have been over dramatic about my daughter's house hunting. She was quite disappointed not getting this particular house. It is a pretty house with great bones and visuals. She'd have been happy, and in just 24 hours before learning she didn't get it, was seeing her life there. She's doing ok, but used some hours she had available to take both yesterday off, plus her regular Friday and just removed herself from house hunting for the weekend. She made an honest offer, couldn't do more, and didn't push risking a bad situation by playing the bidding game. Getting over her disappointment won't be immediate, but she's not wallowing, and feels confident in what she offered. None of us know what the market will keep doing, but we know she'll save money each month until she buys. Hopefully that helps the short run.

I'm still pissed at the rulings of the last week. Make no mistake and don't be surprised, this Supreme Court majority is going to support those that are going to come after some right or value you've had at some point. Don't those type always think they can impose their world view on those they feel are less? You'll be fine of course, if you fall in line with the minority right wing, ultra conservative, evangelical, prisses of the country. That coach was not exercising his freedom of religion. He was grandstanding from a position of authority in a public venue, his personal religious views. Just exercising his personal right to pray, but had to do it watched by a crowd on the 50 yard line?  We all know good old boy/ sports culture of following the leader. Yet another decision the Supreme Court got wrong. Independence Day? Just for some I guess. I say this as someone who prays myself, regularly, sometimes in public places, but I don't end a meeting going to the middle of the room to do it while all eyes are upon me.

Well, I'll celebrate friends and family, our health. I'll celebrate where there actually has been progress and not a backwards slide. I'll eat my weight in watermelon and blow bubbles with the little kids. Then, I'll handle my disappoinment, no my disgust, by doing what I can to get critical thinkers, good decision makers, and those that truly represent our interests elected. How about you? What's on your long weekend plan?