My Friday W's-Paying Our Part 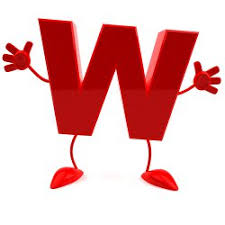 We survived tax day and the damage is about what I expected, a bit more than last year which I'm not really sure why, so will look closer when the filing papers come back from the accountant. DH did make a lot less last year, but the timing of when he had some 2019 bonus money actually paid out in  January of last year (which is 1099'd), an extra 27th paycheck for me in 2020 because of how the pay dates fell, fewer business deductions, and no education credit increased our taxable income. As I think Hawaii Plan said yesterday, we are OK paying our share of taxes, and believe they are important for continuing a a certain quality of life for society as a whole. It's the chunk at once that is a hard swallow. We do plan for this though, so no one will be doing without this spring, even if we tighten a bit to cover the overage. With that shared, I use Fridays as sort of recap of my life, my activities, and plans in the form of my Friday W's.

What's top of mind: on a world stage, but happening locally is the upcoming trial of Derek Chauvan, who's actions that led to the death of George Floyd and resulted in a world response to  systemic racism. Jury selection starts next week. I rarely need to be in downtown Minneapolis, even when not working from home, but knowing this is setting off more pain for the community is gut wrenching. The issue of racial equity has flared up large in my work setting, catalyzed by responses to the pending trial, but really ongoing issues for decades.

Where I've been: Banner week in my life as I both got out for movie night at my daughters, walks outside in the nice weather, my Kohl's pick-up and quick shop, and grocery shopping last night. Woo-wee, I don't know how I have ever been so run off my feet with social commitments. That's what I'm calling grocery shopping these days.

Where I'm going: Our daughter invited us for dinner on Saturday night at her house. I'm bringing cookies for desert and/or the brownie's I still have frozen in the freezer. I'm not sure what she's going to make but she's a good cook and will sure beat needing to cook again myself.

By Zoom, I have book club tonight. I might run over to the liquor store and restock my hard seltzers before I log in. With Sunday perhaps hitting 60, maybe we will go for a rooftop or outdoor drink somewhere. I miss happy hour with friends and this would be a taste of that.

What I'm watching: The movie we landed on Saturday was a Kristen Bell, not really rom com, but more a revisiting an awful stage of teen years, when her brother was about to marry the bully from her  high school. It was called, You Again. It was OK with a few funny moments, and some predictability. If you watch it, or have watched it, let me know if you think the future sister-in-law is still pretty awful, as we both did. I've watched a bit less TV and streaming in general with the nicer weather-I hope that continues because I have been sluggish.
What I'm reading:  I finished, Such a Fun Age and would recommend giving it a read. I'm curious to hear what the others think about the characters, the ending, the  potential future of the story. I forgot what the next book will be, but wil be reminded tonight. I've got this book from the library, plus these retirement that I've  been looking through for my weekend reads. 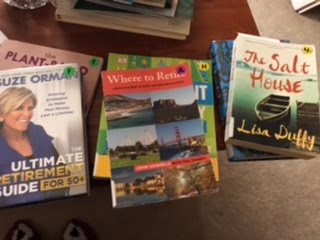 What I'm listening to:  More news streaming, but nothing stands out this week. I'm trying really hard not to get sucked into the propaganda from the weekend CPAC convention. Apparently all the republicans think they are stand up comedians and Ted Cruz making jokes now about getting found out covering up a vacation (just be honest you ass hat, you and your family wanted out of the crappy Texas weather) while people were freezing to death and without water-hilarious (not), and Trump and his sycophants perpetuating the election lies. Well, I guess I was sucked in!

What I'm eating: Too much! Menu has already been different than planned as I try and use up what we have, and bought different things than originally intended at the store. Monday's burger was my meal highlight of the week.
Who I'm paying attention to: .My daughter is top of mind, who has a realtor now to keep her in the loop on houses that come on the market  in several communities. I know she is so ready to find something, but she knows it needs to be right for her. My son as well-as little signs are coming that his industry might be getting more productions up so he can resume a steady income. I'm sure he will be hit with taxes due to collecting unemployment and crossing fingers it won't be more than he can handle.
I have hope in the justice system, or at least  because of the French justice system that former presidents can be found guilty and be sentenced for fraud. I don't know much about the case, but I did pay attention to the headlines and what Treaders shared.
What I'm planning:  I'm watching the calendars on places like Como Zoo and the Minneapolis Institute of Art and the Science museum for limited slots to visit when DD2 is home from school. As masks are required, they have social distancing in place, I feel they are as safe as my grocery shopping. So far the calendars are only as far out as mid month, but I'll jeep checking. Fingers crossed that we'll have decent enough weather to get take out and eat outside
It has and will be a pretty typical week in my stay at home life. My daughter is going to come over for lunch-nothing fancy but eating up some bruschetta and the last of the French bread, hummus, fruit, and a veggie burger. I have no illusions that winter is over here, but the higher temperatures and melting snow are good signs-plus, when I took pup out this morning, we were greeted by an interesting bird call. I do not know birds at all, but might have to figure this one out
as it seemed very directional to us. What are the highs and lows, and thoughts and actions in your life this week?
Posted by SAM at 11:50 AM