Did you do all things fall over the weekend? What about my friends on the southern part of the globe? Has spring arrived where you are? Did those of you in Canada celebrate Thanksgiving yesterday instead of today, letting yourself  relax on a rare Monday holiday? My weekend was a mixed bag of stuff. As I mentioned, DH was off work Saturday, so he got all sorts of things done on Saturday that normally would have been left to Sunday. I liked it-though how well we will get on once he is around 100% of the time is to be determined.

Despite having my Saturday morning become wide open, I was not nearly as productive as I would have liked. I was happy that I remembered where I had a few other fall items-this wall hanging we received from my mother-in-law about five years ago for our anniversary and four little scare crows. Two are here on the front porch, and the other are poked into a hanging basket that is still holding onto a few spring/summer flowers. I tackled the entry closet-it has become a closet of doom. With moving one thing, several balls-basketball and soccer variety, mostly massively underinflated, rolled off the shelf and onto my head. Luckily though, I found two air pumps in a box in the same closet, one even had a needle. I added "mesh ball bag" to the list of things we need for the next trip to a store with such things. My daughter will be glad. Back in August, she was looking for a basketball that wasn't deflated and for the life of me, couldn't figure out where the air pumps were.

The Blogger Zoom meet-up was a success-I hope the others feel the same. Say what you want about how technology has taken over our lives, but  who would have thought even a few decades ago that regular women from  two different parts of the US, France and Australia would be chatting for an hour on a Saturday afternoon, solving world problems, and getting to know each other beyond words on a computer screen? Joining me were The Hawaii Plan, Just Baggage Enough, and Random Thoughts, though Treader at Random Thoughts has her blog temporarily on private. Trolls and witches you know! We left with happy intentions of setting one up again in a month or so-maybe before the race of the US Holiday season kicks off at the end of November. Jan at Just Baggage Enough wins the prize for most committed virtual world traveler as she joined us at 5:00 a.m. her time in Australia. When we get ready to pick a new date, you're welcome to join in.

I'm turning into a lazy cook in the kitchen-wondering at times where it is in fact. We went out to eat Friday night, then DH just made a frozen pizza for lunch on Saturday. He had a text from a friend who knew somehow he was off work, to meet for early drinks and dinner so of course we couldn't say no. After our park clean-up on Sunday morning, my sister had us worker bee's over for  brunch. I stopped on route for fruit and coffee cake to go with her delicious cheese potatoes and egg bake. After the Vikings awful but winning game, we took a drive along the river and with the destination a BBQ restaurant we found by happenstance two years ago. We both got dry rubbed chicken and I have leftovers for today to either make into something, or eat for lunch. We need to give eating out a rest for the next two weeks as no doubt we'll go out when the college kid is home.

I have a busy work week, but fingers crossed, Friday will work for my flex day. I have two clean out projects I want done before the kid is home-then she can help me decide what can be donated and out of the house. I'll leave you  with a picture of the evening sky as we were driving home. Despite it being from the car, the colors were notable. 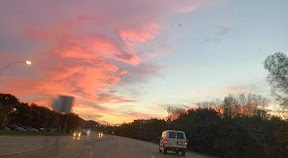