Positively Tuesday-And Another Year in History

DH and I have now been married 34 years. We've experienced joy, loss, frustration, success and all things in between. We've not raised a Norman Rockwell family, but have three kids that I believe think highly of us, but also don't feel so tied to how they were raised that they will find it hard to compromise when they find partners, complete with their family customs and norms, and make their own family. Each anniversary I get to think about how while everything in our lives has not been perfect, we sure got the good end of most of life's sticks. Chaos and clutter  might be our dysfunctional norm, but it's "our" dysfunctional norm. With that, Happy Anniversary week to my dear husband, DH for short. As I capture my joys, smiles, and simple pleasures for the week, may we be worthy of many more anniversary weeks.

That's my sunny side of life update for the week. DH and I may be going to see the new James Bond movie tonight. He had asked our daughter who was originally free, bu tnow has a work project so can't join us. She's going to be on vacation starting Saturday so I'm sure they want every minute of her time before she goes. The following week she was supposed to be on a vacation as well, but will be off with sick time since the oral surgeon is available for the first step. That's what I got. I'll leave you with a happy pup-who made me less than happy by digging in and knocking over the small garbage can in my office! 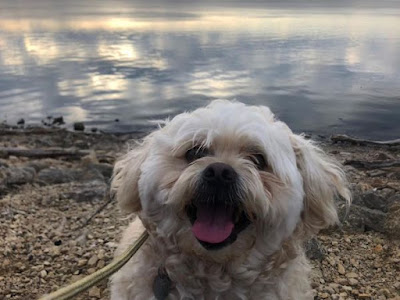