This dinner was over a week ago, but I thought I'd share anyway. There's a restaurant near my daughter's school that makes something called a hippie bowl. It has a rice and root vegetable base, then choices vary depending on the additions. The last time we were there, I had an Asian inspired bowl with cabbage, kimchee, sprouts; hers was Tex-Mex with corn, black bean, cheese, and sour cream. Both had avocado puree. It was a great idea- simple, healthier than so many choices and while they had three options, plus the option of adding meat, endless possibilities. I think the term Buddha Bowl is the same concept.

In using up stuff, plus no one suggesting something for all our tastes, I went ahead and prepped, cooked, or reheated an assortment of things. The result was fixings for hippie bowls of our own. Here's what was available for us to eat however we chose:

DH sensibly and without creativity ate his as separate meal components. He ate his turkey in a deli roll, rice, sweet potato, and salad in the side. My daughter and I created our versions of the hippy bowls. Her's was doused with hot sauce, the revisited  condiment I had forgotten about. 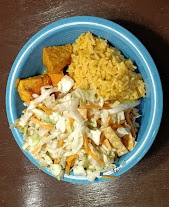 I made one of the deli rolls into garlic toast and we each had one side of the roll. It was odd, but surprisingly tasty. I used up a few more refrigerator lurkers, salad kit, cous cous, turkey, marinated stuff, and a long ago purchased sweet potato. It was the kind of meal that was abundant, but came from " there's nothing to eat" odds and ends. I'm never opposed to the odd and assorted meal components, but thanks to creative marketing, this meal can have a name. I'm so new age!

I'm still not feeling well, and took one of the saliva tests yesterday and am waiting results via email. I had one in hand ordered before Christmas. This is the kind you do while in a video call, then pack as biohazard to ship back to the lab. I'm quarantining from DH until I know for sure. At this point, I think we'll all get it, but I want to know for sure. I've got the rapid tests coming next week. Stay safe and healthy.