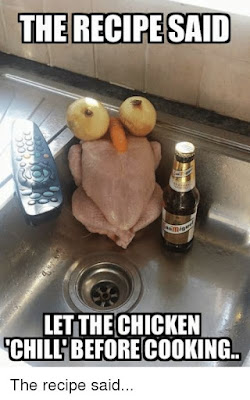 It's fun to share a new recipe, a new dish to try, and fun ways to use ingredients. I think it's good to highlight fails too so newbies don't feel intimidated by early efforts. I'm not a great cook, but think I'm competent in the kitchen. I don't get intimidated though get bored. Sometimes when attempting something new, I miss the target. I hate waste so I try to revive something from the fail.

I shared I made freezer jam. It didn't set. I guess we now have ice cream sauce or my daughter will use on her oatmeal. It can certainly still be used for a runny pb&j.

Thinking I could put egg noodles with a creamy chicken soup in the crockpot, I hoped for an easy soup. Nope, the noodles just sort of partially disintegrated. Then I just had a thick,  but flavorful, starchy side dish. I had for like lunch too the next day.

Forgetting to salt the water when making rice. Others might like it unsalted, but I found it too bland and wasn't helped by soy sauce. I froze it to use in future soups. I sometimes end up with too salty broth and the unsalted rice will help. I also can mix with egg and seasoning for rice crust quiche. It also could be used with pups food.

Not a cooking fail, but I let several apples go to soft. I grated one in place of applesauce in a recipe, and used other with cinnamon for a coffee cake layer.

I know we're all thinking of the higher grocery prices. It's important to be prudent to think where a fail can be salvaged. Waste is a sure way to  increase our grocery shops with nothing in return.  Do you have some good tricks?