Positively Tuesday- Not Ready for Another Round of Snow Edition

Rumour has it we might be in for a full day of snow fall. It started early and forecast is anywhere from 4-8 inches. The last bought of snow pretty much melted after the week of 35-45° weather, and I wasn't sorry to see it go. Depending on blowing, it could really be tough. We'll play pups dog training by ear tonight. We might drop him back to beginner anyway. While we've worked with him on stay, come, wait, down and some basics, in a chaos environment and other dogs, he's whole distracted and may not be getting all the skills, making it harder for us to reinforce at home. He'll be fine though in time, but no need to rush if he's not ready.

My daughter planned yesterday to take things home to telework today if need be. If it holds off until later, but gets bad as the day goes on, stuff to crash at our house and save 20 minutes on a rural highway. We're only about 10 minutes closer than her house, but all in town driving. I guess I'm appreciating she has options, I work from home, and DH's work is five minutes away. Other positives for the week are as follows.

Tuesday: This was my last day of work for the week! I met DD1 with the young dog for his class. He did ok, but it was a lot of stimulus. It's held in the back of a pet store, then the aisles are used to practice the skills. She invested in a better harness and leesh.

Wednesday: I had the day off before the long holiday weekend, using Wednesday as my flex day since Friday was a paid holiday. I got the house tidied a bit; neither dog likes the vacuum but they need to deal with it, as they're the ones leaving 90% of the stuff in carpets and rugs.

Thursday: We had a delicious dinner and good company at DH's brother's house. It was a big crew and while it gets overwhelming for both my daughter and I, we stayed over four hours. The dogs were ready for us, so they got a walk and we watched the Vikings game at home. What a win against the New England Patriots.

Friday: It was my birthday! The day started with coffee with my daughter, walking the dogs, an hour long call with DD2, and an early lunch with DH. I met my sister's and other family for birthday Bingo. We'll, that's what I called it. Texts from my son were pretty nice. I'm choosing to age with grace and not be one of those people who fret about another year older. It's a gift.

Saturday: Gosh, the weekend really was going fast. We did some binge watching of Christmas shows, plus I made food for the birthday dinner with DH's family. This was celebrating fall birthdays. That family really likes to celebrate. My mother in law and her sisters had a craft day a while back and we all got a pretty centerpiece. Here's mine. 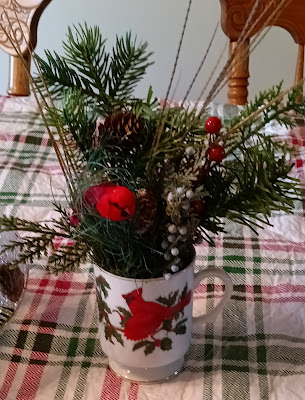 Sunday: We went to church after I had coffee with my daughter. It was nice to see the first candle lit for Advent. There was also a baptism, the first they've done in a regular church service since before Covid. Lunch was leftovers, but nice. My daughter left mid afternoon. I got a start on my Christmas cards. I took the dogs for a long walk. Pup was in a mood though.

Monday: Oh work was a trial. But, I'm getting paid Friday. I did a bit of cyber shopping, stacking a few deals, which felt successful. The young dog was in a weird mood, sleep schedule a bit out of sync, so I took a late afternoon break and him on an extra long walk to get rid of zoomies. Supper of course was leftovers, but I'm happy to say we're almost done. I'm grateful for healthy and abundant food, so trying to appreciate rather than whine. My younger daughter called with a question, and gave me peace of mind that her accomodations for her four days in London are settled.

I'll end this post wishing you all a good week. If you're in snow territory, stay safe and warm.