My Kitchen Pantry- Made Up Soup 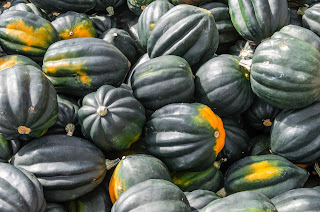 I knew I wanted soup and bread this weekend, but also something to send back with my daughter. A perusing of shelves, vegetable bins, and googling different recipes landed me making up a combination and crossing fingers. I soaked 1 pound of pinto beans overnight, and cooker Sunday. Half with the liquid went in the soup, the rest froze. I peeled and  diced, four small potatoes, and added them with the last 1/2 cup of onion pepper blend still lurking, 6 cups water, four teaspoons Better than Bullion, a hefty teaspoon of each pepper, garlic powder, and chili powder, and just let it all cook.

Seperately, I cooked up an acorn squash in the microwave. Once done and cook enough to handle, I spooned scoops of the good "meat" out and into the soup pot. Another 39 minutes of simmering later, I used a potato masher to mash about half, and stir back in to thicken, but leave loads of beans, potatoes, an chunks of squash un- mushed.

No picture, it just looked like a coppery brown bowl of soup, but the taste was delicious. We added more chili and black pepper to taste though it probably was enough. Even DH chose to have this when I was going to offer something else. Three hearty portions eaten Sunday, two sent home with my daughter, two eaten last night with a sandwich, and one left for one of us for lunch.

The squash and Better than Bullion were the most expensive items, but all together, the pot had to be less than $6 to make, or 75¢ a portion. If I had made veggie broth from scraps and found a less expensive squash, or better yet, a grown from home, the cost could be halved. I know soup is hit or miss for people. We're soup people. Making something that appeals to a meat and potato man and a vegan eater is a win for me. I'm rarely afraid to experiment. I figure if the ingredients are liked, the combination should be liked as well. It felt good to get a little kitchen mojo back.