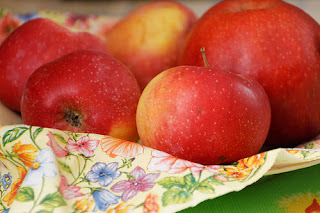 I bought six of the most delicious apples anyone has ever put a mouth to. I keep telling myself that and have DD going along with me. We have been lacking in the fresh fruit department. The strawberries and cherry’s have been eaten almost as soon as they are carried in the door, and my standby bags of apples have long been gone. It was another hot night of soccer, and no subs, so DD was pretty spent after her game. On the way home, I stopped for milk as we had let the last in the container go a bit sour, ice cream, per special request-Moose Tracks to be specific, and apples. Of course I noticed the price at $3.99 a pound, but didn’t really translate how few apples it takes to make a pound. These were lovely Honey crisp variety, and so I selected six perfect ones, and off to the check out I went.  In my head I had spent about $12.00 so had a bit of sticker shock when the total exceeded $22. Those 6 apples weighed nearly 4#’s, and rang up at $14.42, $2.40 an apple! Oh well-if you’re going to splurge, splurging on fruit is a pretty good relapse at being a spendthrift.

My grocery budget of $350 has now been reached for June, a week before the month ends, though I have not yet done my $90 budget shop for the lake weekend. Still, as I counted Memorial Day weekend shop in June, I can count my July 4th weekend shop for July, and might still come in at my $350 grocery level. I would have had a cushion of $3.00, but DH had picked up mint ice cream the night before. Did I mention I live with ice cream fiends?  On the plus side, eggs were the in house MORE rewards special at 49 cents a dozen. I guess I will be making egg salad to bring for sandwiches this weekend-yum! The real test will be keeping DHS out of the grocery store today and next Thursday. He has his odd compulsion with seeing store flyers and thinking he needs to make a grocery run. I could hide his keys, but we live two minutes from the store. I shouldn’t be a scrooge abut ice cream. That’s anti-summer. 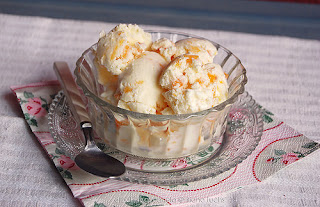