Wednesday Pantry-Cooking from the Seat of My Pants

I've been just sort of throwing meals together for the last week. Things continue to be so busy all day-chaos right up until I try and log off (then hold my cell phone for texts.) Last Tuesday the college kid and I went shopping filling in things form my stock-up shop the week and 1/2 before. She's developed a lot of preferences or rather food she doesn't eat much of any more, so it was helpful having her with. She's not vegan or vegetarian, but really is not a fan of a lot of meat  based meals. She'd rather load up with  lot's of veggies and rice. We've had a lot of rice since she has been home! Here's a few things I've whipped up. I took no pictures, but found them in old posts for a little less boring post.

Vegan Curry: I made a big batch of vegan curry-coconut milk instead of yogurt. Chickpeas for the added protein. Naan bread bought at Trader Joe's as it is vegan and the Aldi version is not.

Vegan Crock pot pasta prima vera: Loads of veg, layered between sauce and  rotini noodles-no cheese at all this time.

Roasted vegetables and couscous: Mushrooms, tomatoes, peppers and sweet potatoes, roasted with olive oil, garlic, and onion, served with a garlic and herb couscous. it was boxed form Aldi, but pretty tasty. 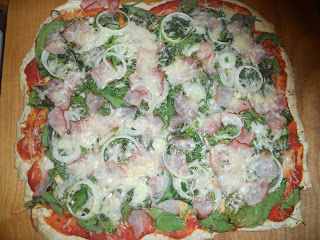 Flat bread crust pizza with various vegetable son one-spinach, peppers, mushroom's, artichoke, and tomatoes. The other had no artichokes but had  ham and pepperoni added.

Chicken cheese and broccoli pasta: Chicken cooked a while back an din the freezer, combined with soup, milk, more garlic and onion, and  the broccoli. It was made in my Dutch oven stove top, but then covered with bread crumbs and baked to crisp and bubbly. So good!

Basically, I've just thrown meal together at abut 6-6;15, hoping we'd eat by 7:00. We over indulged in food out of the house over the weekend, so I am happy to eat food we have in the house. My daughter has been a good influence on our eating habits-more variety. She needs to do more of the cooking and prep though! That's a quick peek into my pantry and kitchen .