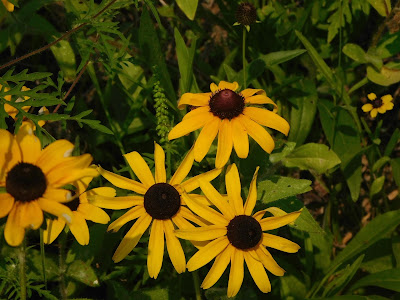 Remember, I have no young kids at home anymore so the running around start of the school year, fall sports season, and early melt downs of homework and friend groups, doesn't impact me. Well, I get a bit of the workload melt down from afar, but don't actually witness it. So far so good though with college kid. She has an incredibly busy life, has already said she's pulled a few late nighters-early morning sessions to complete work, but otherwise seems good. I think she is so happy to have a semi normal college year, the busy is a gift. Where was I going with this? Oh yes, for me, the best days of this summer so far have been the last week. We've had fun days, and sunshine, and enough rain to keep things green, but not enough to ruin any plans. It's crisp in the morning, so drinking coffee outside on the porch with a sweater is pure bliss. Likewise, sneaking away from my desk late morning or mid afternoon if there is a lull in my meeting schedules to walk with pup doesn't mean I'm sweating and sticky by the time I'm back 30 minutes later. I get the midday sun and natural dose of vitamin  D for a bit of an energy burst..

With me highlighting why I think the day after labor day through the real first day of fall on September 20th are the best days of the whole summer, I'll share my top 10 joys, simple pleasures, or things that made me smile in the last week.

It was a quiet week-kids next door at school so I'm not hearing the fighting that typically happens throughout the day, or the parents yelling out the window! Another reason why these early days f September are some of the best of summer. That alone is a joy. I like hearing the bus pick-up and drop off-my office  window catches the sounds-and it sounds like normal! My daughter and I might go apple picking this weekend, but we are waiting of honey crisp and the might not be ready by Saturday. She went on Sunday and got some zestars and blondes and has an abundance to share with me. I think I'll do a pie, but also prep and freeze a batch for a Christmas pie when DS is hopefully home. Both are something to look forward to.
Posted by SAM at 9:02 AM