I can say I did it; it's done. I made a meal of sorts with five items from the Dollar Tree. I knew going into it, a protein and high sodium were going to be the main issues. You can get a lot of basics at Dollar Tree, and I wish I had stuck to them. It would not have been anything unique, but it might have had better results. First, the rules. My meal had to be enough to serve a minimum of 3-4 adults. I had to have five different items and for my self imposed challenge, nothing from my own pantry to add. Many allow salt, pepper, and even stretch to any seasonings they have, plus oil or butter, and sometimes even egg and milk.  I was very strict-which really makes it much harder, but if the challenge is a DT meal for $5, then that's what I think it should be. Had I challenged myself to make 3 meal for $10, I would have had an easier time planning, and probably better quality meal in the end. But, those weren't my rules. First, here's what I bought. 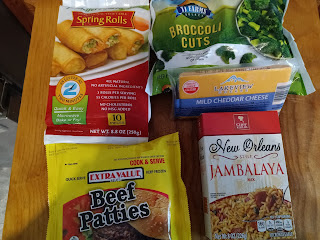 The intent was to make a beefy rice and broccoli hotdish, topped with cheese. But when I saw the state of the broccoli-huge chunks of stems and very little florets, I decided to just cook that separately and hope that  putting cheese over it would help. It did not. I learned why the only frozen vegetables I see anyone buy is the pepper and onion mix, or the carrot, pea mixed vegetables, if they have either. The beef patties cooked very odd. I used as ground beef, but even though it was an uncooked product, there was no juice whatsoever. I reread the package multiple times. Still, mixed in with the  rice dish, it was pretty tasty. Had I known the broccoli would be such a disappointment, in hindsight, I would have bought the  sausage links instead of beef, and just browned discs of  that instead. The spring rolls were going to be my side dish to the  hot dish, but because I served the broccoli and cheese on the side, my plate shows three items. Here's my plated meal. 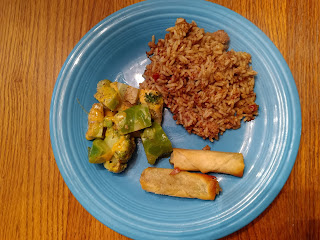 The review. The rice was pretty tasty, but with each bite, I could feel the salt coursing through my veins. Run, do not walk, past the frozen broccoli. I swear this must have been what was left after the plant packaged the real vegetable, and this was the remnants. The stalks were thick and woody, with no flavor except what was pulled from the cheese I  put on and allowed to melt from the steam. The egg rolls, made in the air fryer, had good reviews  on YouTube, which is why I forced them into my menu. I cooked them in the air fryer. They were just OK-the roll itself got nice and crispy, but the veg inside was a bit mush. A little dipping sauce would have gone a long way. The hit though might be the 5 oz. little brick of cheese-which was actually cheddar cheese. At 20 cents per ounce, it would come to $3.20 per pound, which is about what I can get at Walmart or Aldi. Admittedly, I had bought this before in both cheddar and pepper jack, so knew it was going to be fine. Thankfully, I didn't waste more than 1/2 on the broccoli that could not be saved.
Here's the sad facts. Packages were different serving sizes, so I converted everything to five servings to  compare along with the main ingredient, the rice. My plate above is roughly 1/5th of each, so the following should apply. While I didn't care for the broccoli, I had enough to eat. DH ate a plate, but then later had a bowl of granola and yogurt. I have probably 2/3rds of the rice left and will use over the next couple days for lunch. We nibbled on the spring rolls  later, and I tossed the rest of the broccoli. I've got1/2 the cheese left.
Total Calories        562 (women average 2,000 day, men 2,500)
Total Sodium        1,230 gr or 61% of ADA for a 2,000 calorie diet
Total Protein            19 grams (women need average 46 g, and men ave 60 g)
We both would likely exceed our ADA of sodium, and be shy on protein in the day depending on what else we ate. DH would be calorie shy by a long shot, unless he ate double portions, but then, his sodium on this meal alone would be  over his ADA. This was an interesting experiment, and as I said, with different rules, I might have done much better both in quality and health. Your thoughts? Please note this was all for fun and entertainment. I in no way  endorse eating this way nor will rush to repeat it myself. In a future post, I'll share what I do think might be worthwhile DT buys.
Posted by SAM at 8:25 AM