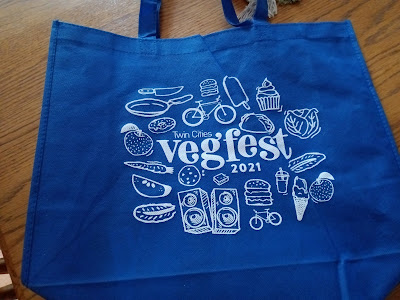 Yesterday was a hot one! My daughter and I went to enjoy some of the fruits of her hard work on the planning committee for the Twin Cities Veg Fest. She spent Saturday working on set up, and countless hours through the year as it was on again-off again-then on again. Basically, the festival promotes plant based, vegan eating with lots of food vendors, information and advocacy tents, and vendors selling vegan and cruelty free  products. By 9:30 when we waited for the "we're open for business" greeting, we were already sweating. It was 85 degrees and full on sun by the time we left shortly before noon.

There were fewer vendors than last year, and a few that my daughter wanted to try were order ahead only, but we tasted some treats. We probably picked the most expensive place for delicious, but pretty small portions of a Nashville sandwich, which was more a slider size, and walking tacos, which really were vegan nachos made with lentils. We spent over $35 combined on those two items with tax and a tip. In my humble opinion, prices like that for small portions will make people that are on the fence about vegan eating think it is unaffordable. Yes festivals are always going to be pricey, but my daughters sandwich was four bites! On the other hand though, she got a beautiful looking dish of a soy and coconut based soft serve, with fresh fruit and granola for $6, which seemed much more reasonable. I'm not a huge ice cream eater and haven't quite liked the vegan versions much, so I passed. With the heat, I wasn't feeling like a lot of food anyway.  We also got goodie bags though with more treats and samples, and tasted Lite Life(?) hotdogs, which were really good and I will add to my shopping list the next time I'm at Trader Joe's.

We didn't stay to hear speakers or cooking demonstrations, but had a lovely, but hot morning all the same. DH had gone to the lake to help put the other dock in. He said the water was cold, but with it being so hot, it felt good. His cousins small kids had been swimming earlier. He was the only one there from his immediate family, and was home before the Vikings game came on at 3:00. Midway through the second quarter, our power went out. It was  Facebook frenzy to learn that apparently a roof blew off somewhere and landed on the power lines. DH ended up listening from his car radio as the outage impacted half the town, but not my daughters area. She doesn't have regular TV or he would have gladly squatted at her house. It was back on to see the last quarter, sadly, to see yet another last minute Vikings loss due to a missed field goal. Our curse.

Other than that, I didn't do much else but hang out with pup. We had nibbled on hummus and veggies during the game, and I used up the last of the sauce from the pizza hotdish and naan bread rounds from the freezer to make DH and I some little pizzas for supper. I took pup for a walk after 7:00 when it had cooled down considerably. It was a very pretty night outside, though the early sunset is sure a sign fall is coming. I did some organizing for the week ahead before getting a somewhat early night to bed. Unfortunately, my insomnia got the better of me, and I was  wide awake for hours in the middle of the night-some reading eventually lulled me back, but I'm slow moving. I could use another Sunday in my week.