Friday Free for All-Making My Own 4 Day Weekend

I'm actually taking my flex da today and I took Monday as a vacation day. I had thought I might have to make the four hour trek north to get my kid moved home, but she thought ahead and took some things home at Easter, and said she likely to do a little purging as well. With no constraints or commitment, I'm declaring it my own 4 Day weekend. There's so many things I need to get done though and if we dare get any decent weather, some of it will be outside.

Thank you to those that said I could have some luck getting the tulips to regrow next year. Now if the squirrels and rabbits decide to leave them alone, they might stand a chance. I won't go to the work of anything but perennials planting in the ground, but I will do  a few flower pots and baskets. I've got an odd assortment and want to "deck out" my deck. Since both labor and supplies are through the roof, it might be months or even next summer before the deck is pulled down and either replaced or a patio poured. But I love it out there. I think I'll move the lounge chairs to the lower part and the table and chairs to the upper. I'll play around and see what looks better, fees more comfortable.

At some point, DH has to make a decision about either hiring someone to take the tree down in the front, or get a buddy or two to help. I'm so sad about that the Maple. He was supposed to pick out what he wanted last year as part of fathers day, but didn't. I wont go another summer though with a dead tree in the front, and no new one planted. The only good thing is we'll have plenty of firewood, though it might not be dry enough this summer. That's another job-moving the fire pit farther to the left, and a few feet back into the yard. I think it is too close to a tree, plus, the way the yard slopes at the very back, makes it hard to get chairs around the fire pit. This very well could be our last summer with any kids at home. Who knows where the College Kid ends up after graduation, and I know she and her friends like hanging out at fires, and I like them hanging out here too.

I'm not thrilled about choices for a  make shift cupboard, but I need something with doors to help as part of my make do  bathroom makeover. Again, due to prices and labor (and indecisiveness and fear of spending $15,000 by DH and not getting what we want), I'm thinking of ordering this or something like it.

I'll get rid of the old table/tower  that I've sprayed painted so many times it is probably only  held together with paint, and put this in it's place. It has the same footprint, but also has doors that will let us store  unsightly extra rolls of TP, soap, a few hand towels etc. No more clutter sitting on open shelves. I think I will move the gray to the downstairs, paint some color from the existing shower curtain ( greens or blue), and the small two shelf stand in there, I'm going to paint  a still to be decided shade of  blue and bring to the cabin for a book shelf in our bedroom. I've sort of been looking for one-that will solve it.

Food I'm Not Good at Making

I know all of  you that rave about your potato salad might come at me with how you make yours, how it's perfect, and it's the easiest dish in the world to make. I beg to differ- your's maybe is terrific, but I don't think it's an easy dish to get right. I've had some really lousy potato salad and some really good stuff. My daughter and my MIL make  terrific potato salad. One of my sisters that thinks she makes good potato salad, does not. My mom didn't make good potato salad either, and I would have never said that to her, just like I don't say anything to my sister. They both like it the way they make it and I guess some others do too, so why hurt peoples feelings because I personally don't? It's not like I had to eat it when there was always  other salad options.

I tried again yesterday, and while it was OK, it was not terrific potato salad. DH loves potato salad, and fortunately, is not that picky, though he'll share when one is really good, or just OK. Let's say, he appreciated my efforts and declared it, OK. I think some foods are just not meant to be mastered by everyone and that's just fine. In terms of potato salad, this is why deli counters exist. 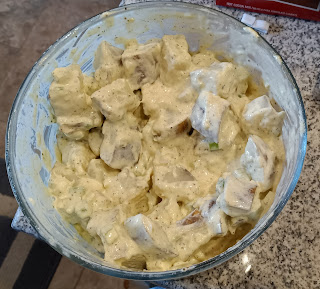 At my team meeting and then again at Trivia, we got off on tangents of old television shows. The first was sparked by my team  member that had been on vacation last week in New Orleans and part of their trip was an airboat ride. The boat captain fed gators marshmallows to open up real wide. This moved to another staff from Florida who shared as a child she'd be fishing and notice gators on a regular basis, but they were taught young to move it along! The show Gentle Ben came to mind, but of course only my 60 year old team member and I knew it. Here's the iconic opening. What's not to love about a bear on an airboat in the everglades?

Her favorite was The Andy Griffith show. She started laughing remembering Barbie Fife. I don't know if I'd want to watch them all again, but bringing them up brought good memories of after school reruns and the treat of watching TV if home sick from school. It's funny to think what the 30 something's on my team and my kids thought old TV shows were. Bonus points for you all if you can find the link between Gentle Ben and Andy Griffith Show.

That's my yammering about nothing much this Friday. What's come to your mind after reading my thoughts?