Friday Free for All- Dodged a Scare

Greetings from my little spot in the world. Another work week is winding down. I'm just working this morning, was supposed to be off, but I need to cover a meeting for someone who shifted their day. I don't mind as I'll take a 1/2 day perhaps next Friday. It's Friday Free for All so nothing in particular to recap or muse about but risk of a rant. Life is slow and busy both. Lots going on, but I'm feeling less stress personally, just trying to be a support where I can. However, I've been battling crud this week. We also escaped a scare yesterday. My daughter was going shopping with a friend late yesterday afternoon to the Mall of America. I had already suggested they not stay late as it's a magnet after 7:00 for idiots.

She called about 5:00 to say her friend got a call from her boss letting them know a lock down due to gun shots was in progress. I was so relieved to know she was never there, but sickened again. That place is like a major city with people on top of each other. If there was a mass shooting, it would be horrific. There was an incident there back in December the day after she and I spent the afternoon shopping and out for lunch. America, land of gun nuts and criminals, some of which aren't even in office. Now before anyone gets all wigged out calling me unpatriotic for commenting anything America, it's a mom's prerogative to be sick of this crap. Hearing something like this or worse, each and every day is not anything to wave a flag about.

I'm not sure if allergies, a summer cold, or just a bit of a funk, but I've been less than peak the whole week. Sneezing fits wear me out. I've been tired- asleep early and hard to wake up fully. I've used a couple breaks in my work day for closing my eyes in a dark room for a bit. It might be signs of too much sun and too much computer screen. On meetings that are large, a lot of talking, I am trying to turn my camera off and just listen, and only join or add when I need to. This helps my eye strain.

It's not just me. Others at work have said similar. One of my team feels she may be holding onto Covid symptoms from her and her families bout in early June. Her son has had a running nose and cold like symptoms for months. She still battles coughing and has had to turn off her volume during meetings because her coughing has been so bad.

I regularly suffer during ragweed season, but it's early to be feeling the impact already. I'm trying to hold off overdoing antihistamines so they kick in when I really need them, but do take my generic Claritin daily. On a bright note, with college kid out and about, I stole the hammock for an hour last night. Dang if it wasn't comfortable. There was no humidity and the high was 85°, but in the shade of the tree, almost felt cool.

My day to day life is duller than dishwater. No, let me rephrase. It's without upheaval or drama, good or bad. That's not to say I'm not excited for my family and friends with life events going on or coming soon. I think my contentment in living a simple life is growing. Sure, there's things I'd certainly like to experience, and no doubt will experience some of them, but this summer is about others. A few months ago, maybe even weeks, I was of a glum mindset, feeling left behind, and unfulfilled. Perspective is a good thing to develop. There's always going to be people with more, and always those with less, whether that's money, free time, travel, grandchildren, or new homes. Sharing other people's joys doesn't take away from ours or keep us from experiencing exciting things too. Helping someone, particularly one who has struggled, embrace a good thing is a joy in itself. I guess what I'm babbling about is that I'm trying to focus energy on good things even if I am not personally the benefactor.

I'm bringing my daughter to the airport early afternoon as she road trips back to Minnesota with a friend who's been doing a summer internship out of state. She's her travel companion. DD1 and I are going to the lake, but just overnight and come home tomorrow. We have MN Twins tickets in a boxed suite Sunday compliments of my sister's company. Traditional ball park food and sodas are included. I haven't been to a game in three years so looking forward to it. The Twins are neck and neck with Cleveland in the AL Central lead. I used to be a bigger baseball fan, but since none of my immediate family cares too much, my interest has waned. A perfect summers day at a ball park with fun people, is a good time for most regardless of how big a fan. 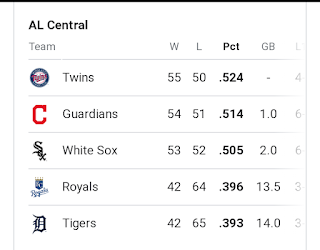 That's my Friday Free for All meanderings. Do you have exciting news I can latch onto? Have you had any summer ailments? What's your views on baseball? Chat with me in the comments.