Good Saturday morning. I have a pretty good to do list and today's the day pup and grandpup get acclimated. Depending on how it goes, my daughter and her dog might spend the night as she has a morning meet up with someone nearby and might be a good test night. She feels better that the bobble in her electrical is taken care of. She just has a lot of change and things to learn at once. Hmmm, why did she get a dog you might ask? At this point, it's not important, but over time, they'll be so good for each other. What else is on my mind.

Of course I'm watching the hurricane devastation like most of us in the US. I can't forget it also hit many island countries too, and the impact from last week's is still felt. I can complain about snow and cold, but I've never experienced anything like hurricane weather. This is not the time for politics- people just need help.

Where I've been:
My week was quite busy with doing puppy care, a work gathering, and a two day conference. Last night I played cards at my sister's.
Where I’m going:
DH isn't going to work today and taking care of projects. I have a new normal work week ahead. At some point, there's a few things we'll need for groceries, but just basics.
What I'm eating:
We finished the tortellini soup earlier in the week, and pasta salad later. I froze one container of chili. My daughter has more produce to pick and use this weekend. I'll probably make pasta sauce of some sort, but I soaked beans for soup.
What I’m watching:

I surfed a bit and landed on a French 6 episode comedy called Reunion. An atypical family runs into financial hardship I their hometown in France. Jeremy learns his dad he never knew left him 1/2 an inheritance on the island of Reunion. He also learned of a half brother. The family expands as the French family moves to Reunion. I enjoyed it, but just one season so no idea if there will be more. It featured Sara Martins, Camille from Death in Paradise, as the brothers wife.

Agatha Christies The Mysterious Affairs of Styles for Monday bookclub. I may start Little Women soon. I think if it as a winter read book though.

This morning? It's been quiet outside. I heard dogs barking, likely a block or so away. I've nothing on so just hear the house sounds.

I'm planning to not feel so much stress. Each day I use the meditation, calming time before starting my day. It has helped. I've given myself two minutes here and there to do the same during the work day.  It's supposed to be very nice outside today, so besides inside tasks, and he day calls for weeding, and other general outdoor tidying as well.

Hmmm. I can't think of anyone behaving so egregious this week. I'll slap a couple YouTubers for their "hauls" videos. In an economically challenging climate, doing try on hauls of cheap mass made fast fashion feels stupid. Plus, from what I've learned, they really are not "obsessed" with the shirts, dress, sweater, pants when a week later they're reselling on Depop or Poshmark.

The conference I was at was very well organized with good panels and speakers. The hotel staff were impeccable in their professionalism. Everyone thought so. It was nice hearing my fellow attendees give lots of kudos to the staff who treated us so well for two days.

Seeing how much my DH is happy with my daughter's dog. He's more of a bigger dog guy, and while if course pup is loved, he's going to have fun with the "real" dog. 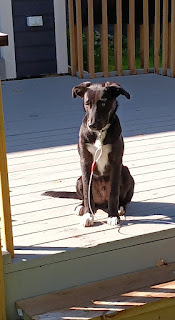 I hope your week was filled with gooda d positive things. Stay safe.