Friday Free For All-:Counting Down

I seem to be in a countdown mode all over my life right. The tiny bit of child still in me started counting down to Christmas on December 1. We bought a choclate Advent calendar last year at Trader Joe's, but it's dated through February 2023. Why not open the little doors? One is now open to reveal a tasty little bite of choclate.

Before Christmas, I'm counting down the days to the winter solstice, the darkest day of the year. But, then we start picking back up those first seconds then minutes of daylight every day.  That's my consolation by mid January when I'm so over the magic of winter white and lights and all it seems is dark, cold, and frightful. I need to get a list ready of things to look forward too between January and April. Having things to look forward to helps my countdown to spring.

As of today, I'm counting down five weeks until my daughter is back in Minnesota. It's been a long time since September 7th. I really miss her. Her college Christmas concert, quite a major production would have been this weekend on campus, then next week in Minneapolis. It feels sad to have only gotten two live ones because Covid caused 2020 to b a recorded and pieced together, socially distanced performance. I remember this feeling with my older daughter too, as she had been living at home the nine months from her college graduation in December to leaving for grad school in London in September. It was different when DS left as he never moved back home after his second year of college and had other kids home.

There's probably more, but the last count down I'll mention is 9 months to DH's retirement. I threatened to hide his phone on Thursdays. They won't leave him be! Plus, he's got an even bigger asshat of a guy managing a different department trying to create chaos with other departments, an arrogant prick that decided everyone else that works there are small town bumpkins and customers are idiots.

I suppose I should focus a bit on things to enjoy while I'm counting down. Still no commitment from DS. I think there's some cheap(ish) flights but he'd need to travel with just a back pack or the baggage fees are ridiculously high. A change of clothes, extra socks and underwear, and he'd be fine. He can grab track pants and sweatshirts from DH when his stuff is in the wash, and alternate wearing clothes for gatherings. Gifts can be shipped back cheaper than luggage fees! If he doesn't make it, we'll still talk with him, and I'll ship things anyway.

I've got a holiday music concert tonight with a friend, and a Christmas market tomorrow with the mom's. Next weekend my sister's and I talked about doing the county fairgrounds Pioneer Village Christmas. The dogs can hang out with DH, and us girls can meet whoever wants to join. The last weekend before Christmas I'll do my wrapping, final treat making, and delivery. There's trivia to break up the week and we'll get together with DH's friends and wives at least once. DD has a dog park fundraiser on December 18  she's helping with, and I'll bring her pup for photo ops. She's got her house so cute for Christmas. Here's a taste. 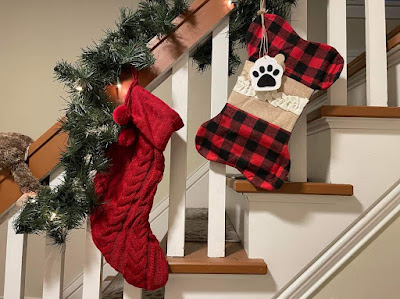 That's my Friday ramble, I mean free for all musings. Do you get in a countdown mode before holidays, trips,or between seasons? How do you try to stay in good cheer during the long winter months if you can't escape?