My Week in W's: Winter is Here

Good morning. Sorry for my strong language yesterday describing a coworker of DH's. I really struggled for words to put to the type of person that proclaims, "I'm going to get a few people fired" then proceeds to pick fights to try and draw reactions, intentionally throwing gas when he gets the spark, as just a sample of his behavior. I landed on the words that best fit, but apologies if offended. It's a cold one- highs only 9° today with bitter wind chills, so my day might change from plans. Other life stuff is captured in my weekly W's.

What's Top of Mind:
DH really is. He came home yesterday chilled, ankle sore again, but also complaining the top of his foot was bothering him. I've noticed a few other signs that the stubborn man needs a head to toe check up to rule out a host of possible ailments contributing to his lack of well being. I don't know why he's so stubborn, but I'll need to sick his kids on him again.
Where I've been:
I left him with hot tea, though learned he eventually did eat a couple tortillas with cheese. I went to a Christmas on the Prairie concert featuring the band from a Prairie Home Companion and other Twin City musical icons. It was phenomenal. It was held at our local art center, where DD2 took violin for years, owned by my book club leader and friend. They served dessert and drinks, donation only, at intermission. It was a wonderful way to kick-off December.
Where I’m going:
.
Plans may change due to the wind-chill, but I'm supposed to go to an outdoor European style Christmas market with my mom friends group. We'll do something together if we don't want to brave drive or temperatures. A two hour lingering brunch sounds good. Next weekend planning to see the pioneer village Christmas set up with sisters.
What I'm eating:
.
I'm done serving leftovers except for maybe lunch. We made tacos on Thursday, but I froze half the batch for a future meal. They were tasty. I had a cheese sauce found somewhere that I heated up and it gave them a kick.
What I’m watching:
I've started Game of Thrones. It'll take me a long while but no doubt there'll be bingeing come January. I'm both invested and not in characters, but I hear that's good as no one is immune from a sword or worse.

Shame on me. I'm not reading anything right now, but perhaps links to full news articles.

DH just got up and says he feels 100% better. Pup is moving positions but not ready to get going. I think he misses the grandpup, or at least wonders why he's not here. I've not heard any plows or sand trucks yet.

Tomorrow will be a good day to finish anything Christmas related house wise I intend or let it go. My daughter will come for the Vikings game and puppy will stay Sunday night. She and I might get some treat making done, and maybe start some wrapping. I have to go into the office Monday for  a 9:30-12:30 meeting. It'll mean the puppy in his kennel a bit longer than he's been, but he's been known to sleep four hours at a stretch.

People who drive big trucks so think they are invincible on the road in bad weather. It was snowy, blowing, and getting cold last night. I stopped for bread and eggs on my way home from dropping off my friend and her sister-in-law after the concert. Twice I saw near misses with back ends of trucks swerving because they were going too fast, and another car nearly swiped. One car  ended up having to swerve themselves and ended up backwards. You can be sure I kept my distance from other cars the best I could.

My friend who had the extra ticket and offered it to me, though I insisted on paying for it. I really needed it. The rest of the group were members of her family I knew. I took her 84 year old aunt's ticket, who was worried about the weather so didn't want to go out. It was a good evening.

The grandpup decked out in his winter gear. We may try booties but I've  read mixed verdict on them for safety and slipping particularly when they are quick dogs.  For now, we try and limit the length of time outside, but give more sniffy opportunities/ short walks. Isn't he dapper though? Pup comes with his own thick coat and he'd never tolerate getting a coat on, but I have used a human sweatshirt draped and tied on bitter days. 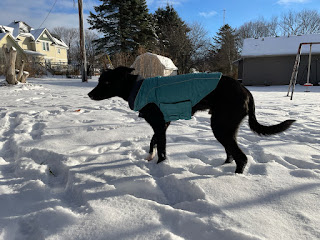 That's my W thoughts this week.  Play along with the W's in your life this week.
Posted by SAM at 7:18 AM